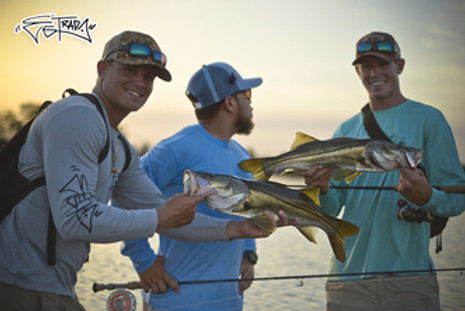 A few months ago, Estrada Art Ambassador Capt. Ty Loyd Jr. was telling me about his glades walking.
He would walk through the sawgrass, cattails and swamp water in search of Snook, Tarpon, and Redfish.
I just assumed he was exaggerating a bit for a couple of reasons. I assumed if he said it was this crazy journey just to get to the fishing grounds, less people will likely ask to be taken there. And also thought it was just an exaggeration, as any fisherman when telling a story.

Every week, he would send me photos of him in the swamp with snook and to be honest, I never was that impressed. Now, these were mostly all quality snook in the 28-36″ range, but snook kind of lost their luster the first time I saw tailing redfish.

One day Ty decided to stop sending photos, but sending videos of double ups, triple ups on quality snook. Still, I was intrigued, but not quite hooked just yet. One day, he sends over photos of him with upper slot redfish out there….. Now he really got my attention.

I called Ty and asked how is afternoon was looking, and said he was free and would be down to do some fishing. I called Warren back and let him know we were on. We had one thing to do, first. Stop at Chipotle for lunch before heading out west. There were a few moments where we didn’t even know if we were going to make it on time, since Warren missed the exit on 75. We finally met up with Ty and Matt and they said we were right on time. We randomly pulled over on the side of the road, I was wondering if something had happened or something. There was nothing around, just sawgrass and puddles. Ty tells us to grab our stuff and get going. He quickly scanned to make sure he didn’t jump on any gators and led the way. We are about 60′ in and the water opens up, but we are about knee deep right now. Ty makes his first cast and instantly hooks up to a Tarpon. I make my first cast to the right, and also hook up to a Tarpon. Warren is grabbing for his camera to take a shot of the double up, but realized he didn’t have an SD Card. Now, I had a spare SD card in my camera, so I told him to go ahead and grab that one.

Somehow, he dropped it “into his bag”, and while digging through his bag for the card, ejected his 35mm into the swamp. As we are here dealing with this, Ty just walked off. I figured we were probably just staying there at that edge. There were about five Tarpon caught while Warren and I dealt with the camera casualties. So we go ahead and follow Ty, although now we are no longer knee deep, we are waist deep. We walk for about 20 minutes more and end up on a somewhat dry cattail patch. We are now standing between ankle to knee deep (depending where one would step) in water and grass, catching a snook or tarpon every cast each of us.